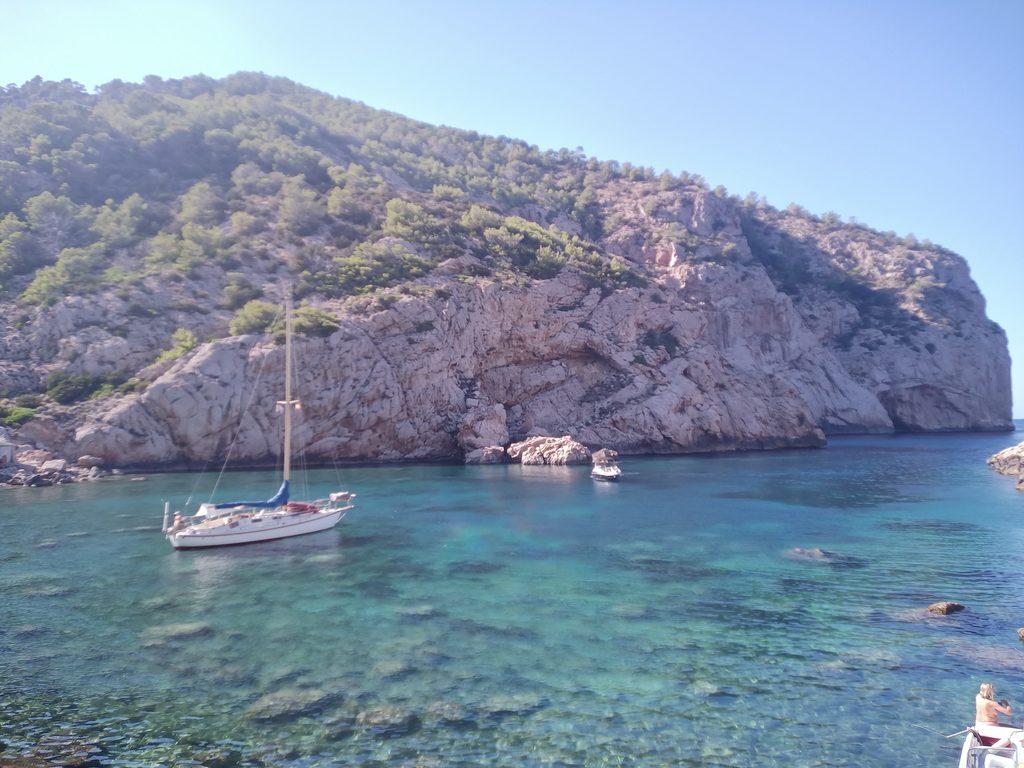 After my brother Tom had headed back home, I was now alone on board again. I didn’t stick around in Alicante for long, since I was looking forward to the Balearic Islands, where I finally hoped to find some sheltered coves for anchoring.

Unfortunately the wind – typical for the summer in the Mediterranean – was very weak and unstable. At least I was able to do a bit of sailing on the way to my next stopover in Calpe. There I stayed at anchor for two nights and climbed the impressive rock that towers over the bay.

After I had finished my climbing tour I finally headed off to Ibiza the next day! I raised the anchor before sunrise for the 60 nautical miles crossing. This time I was lucky and was able to sail a good part of the way before the wind died down for the last few miles. Nevertheless, I arrived just in time for sunset – now under engine – in a bay near Sant Antoni.

Here in Ibiza the water was indeed even clearer than on the coast on the mainland and so I enjoyed the beautiful weather and swimming around the boat.

I stayed in the area around Sant Antoni for a few days, but the place couldn’t really convince me. In normal times, this is a stronghold of the party scene, but the place looked strangely deserted due to the Corona pandemic. And so I soon set out to explore the north side of the island.

In the north I found some really wonderful anchorages. It was quite busy, but luckily I always found a little spot where I could drop my anchor. A neighbor in the anchorage told me that the bays would be extremely empty this summer due to Corona. So apparently I did everything right, choosing this year for my trip into the Mediterranean. However, my definition of “empty” is still a bit different. I have no idea what it would look like here in normal summers …

Unfortunately, as is typical for the Mediterranean, the winds were quite inconsistent. But since I didn’t have any time pressure, I waited for the right wind for longer stretches and tried to only use the engine to move to neighboring bays when there was no wind at all.

However, the Mediterranean should not be underestimated either, and I had to weather a storm with gusts of up to force 9.

Fortunately, my slightly oversized CQR anchor held up well. In contrast to my French neighbor, who drifted further and further towards the rocks. I finally drove the dinghy over in the storm and helped him to reset his anchor. I got pretty wet, so there are no photos. But it’s good to know that the dinghy with the small outboard holds up well even in such conditions.

Overall, I liked Ibiza a lot, but after visiting Ibiza Town for a few days and working a little in a café there, I moved on to Mallorca.

But before that I anchored for one night in another tiny bay that I had all to myself. A large part of the ground was covered with seaweed, which I did not want to destroy with my anchor under any circumstances. But in the middle there was a small sandy patch, so that I could use my newly acquired snorkeling equipment for a precision anchor maneuver.

The wind forecast was good, so I raised anchor at the beginning of September to sail further east. Mallorca, here I come! The south of Ibiza and Formentera will have to wait for my next visit…

I haven’t had a trip in a long time. Reading your article makes me crave a long sea trip. The seas you go through have so many beautiful sceneries. I love the way you handle sea weather situations. Congratulations on your wonderful journey.

Thank’s a lot! Fingers crossed that you can get out on the water soon again as well…