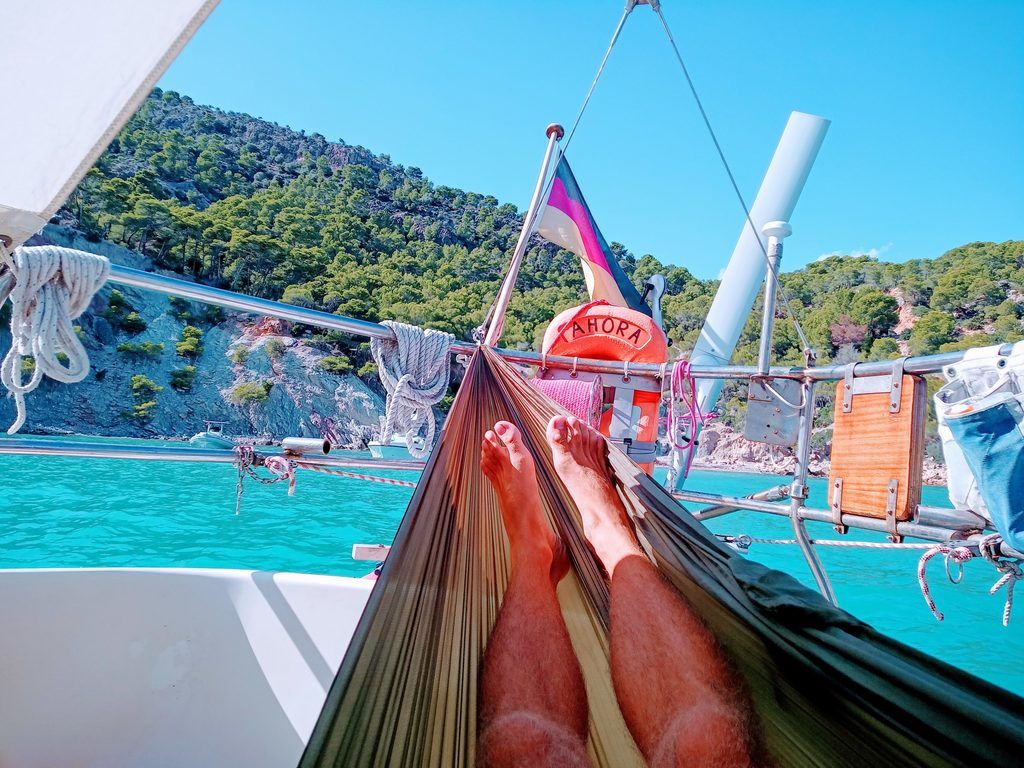 In Germany Mallorca has the reputation of being a “party island”, similar to Ibiza for the British and Cancun for the Americans. Because of this cliché, I had never been drawn there before, although I had actually heard a lot of good things from friends.

But, according to Mark Twain, travel is fatal to prejudice, and that’s one of the reasons why I travel in the first place. So I was excited to finally get a first hand experience of the island myself. And I was not disappointed. In the month and a half I spent on Mallorca (from the beginning of September to mid-October) I was able to get to know a beautiful and extremely versatile island.

Fantastic anchorages with crystal clear water, beautiful nature for hiking but also the city of Palma really made me enjoy my stay. The Corona statistics on Mallorca were relatively high this summer, but stable.

Due to the pandemic, the island was eerily empty in places, and in places like Santa Ponsa most hotels and restaurants were shut, even though it was only the beginning of September. What seemed rather depressing in Santa Ponsa was a blessing in Palma. The city, which is usually overflowing with tourists, was now mainly populated by the normal inhabitants. Friends who live there clearly enjoyed having the city to themselves, even if the situation is of course a disaster for the local tourism industry.

Speaking of friends: I not only met Micha again, who is getting his new boat ready on the island, but also friends from my time in Konstanz and a former fellow crew member of Bark Europa, with whom I sailed to the Antarctic almost 12 years ago. How nice to have friends all over the world! 🙂

But I also made some new friends: Lars & Alex on their beautiful Tayana 37 “Navika“, the crew from the Northern Shadow and Lena, Andi and Nalu from “free like a boat“. It’s great to see that there are other young people who have chosen a liveaboard lifestyle.

Even though the water was still very warm and there were many sunny days, you could tell that it was getting autumn. Towards the end of September, almost weekly either a front with strong winds from the west moved across the island, or the mistral kicked in from the east. For me, this meant that I often had to change my anchorage and sometimes had extreme swell at anchor.

Even in places like Porto Colom, where I planned to weather out a storm on a buoy and actually expected 360 degrees protection from swell, the waves were reflected by the rocks in such a way that up to 1.5 meters of steep waves hit the boat from abeam. Absolutely impossible to sleep under these conditions …

I hadn’t been to a port since my departure from Alicante in mid-August, but now it was mid-October and the off-season prices were affordable even on Mallorca. So I treated myself to a few days in the harbor in Port de Pollença in the north of the island. But it was also clear that I didn’t want to spend the winter in Mallorca.

But it was still a heck of a long way to Greece, where I had initially planned to spend the winter. And I also really wanted to work on my new project (more on that later …)

So the idea came up to stay in Spain for the winter (which I had first rejected because of the expensive port fees). But a friend had raved about the Port Olimpic in Barcelona, where she had been living on board for two years. The prices there are very humane and I really liked Barcelona when I had visited the city 10 years ago. So I made the plan to sail back to mainland Spain at the next suitable weather window. More on this in the next blog post.

But Mallorca was definitely worth a visit, and I am sure this will not be my last time on the island!