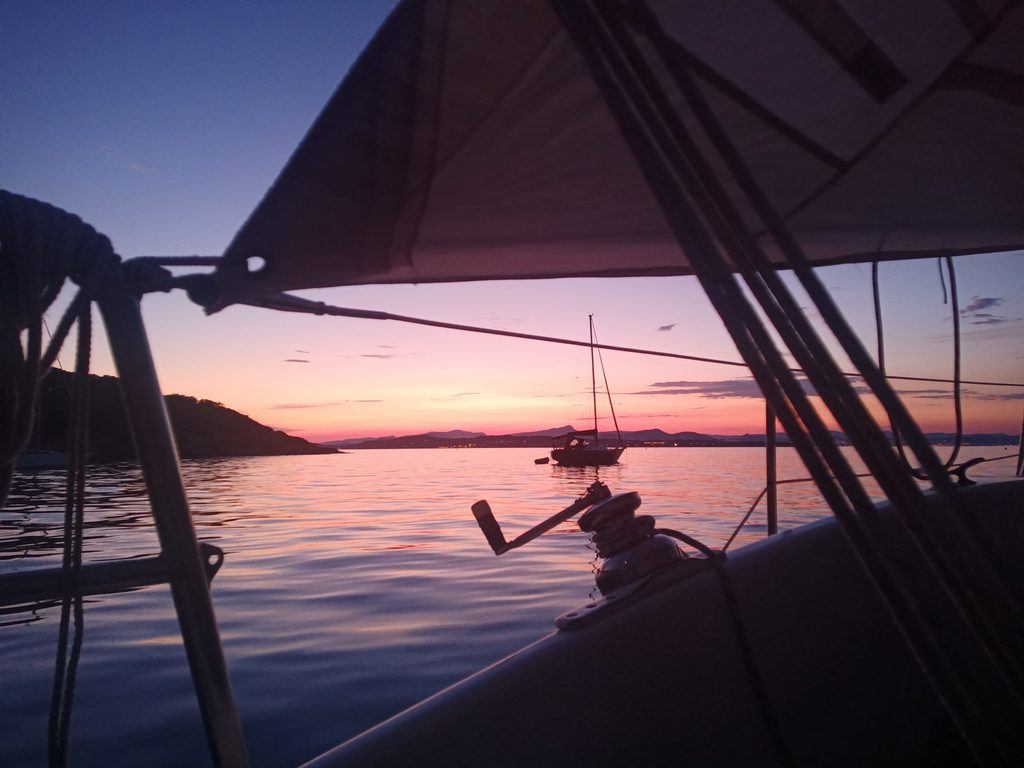 For the trip from Cadaques across the Golfe du Lion my father had joined as crew. This made me very happy, because on the one hand it had already been two years since we sailed together last time, then around Brittany. And on the other hand, I’m glad to have someone who can help me keep watch during longer passages. So we can take turns in two-hour shifts during watchkeeping and I do not have to set an alarm every 20 minutes to check if all is well.

After quite strong southerly winds that prevailed during the week, rather weak winds from varying directions were forecast for the weekend, after which the mistral was to set in on Monday evening. Mistral is the name of the wind that blows down the Rhone Valley from the north. It brings cold air from northern Europe into the Mediterranean and is notorious because it can occur very suddenly and often reaches gale force in the Golfe du Lion.

To make sure that we would have a calm crossing, I had compared 5 different weather models. Four of them predicted absolute calm in the night to Sunday from about midnight, and one just under 3 Beaufort from the north. So, rather too little wind, but of course still better than too much. On Saturday, there should still be a good southerly wind until the evening, and then on Sunday morning 4 Beaufort from the north.

So off we went! On Saturday morning we set sail with course WNW.

After very light winds during the first half of the night, a small breeze from the north came up around midnight. Perfect, we thought. Maybe the model with the three Beaufort from the north was right! After I having set the main I just wanted to hoist the genoa, but the wind quickly increased more and more. This got a little scary and I dropped the main again to see how things would develop.

To make a long story short: We were completely surprised by an unannounced Mistral. None of the five weather models had predicted anything like this, and yet it had freshened from 0 to a constant 7 Beaufort in less than ten minutes.

The corresponding wave was not long in coming and so the night became very restless. To make matters worse, I got caught by seasickness. A steep 2-3 meter wave from the side got ahora rolling quite a bit. Fortunately, my dad doesn’t mind the rocking at all, so I was very glad to have him on board. Thanks dad!

Apparently we were not the only ones surprised by the weather. Twenty miles southwest of us, a yacht was sending Pan Pan with rudder damage. Too far away for us to have been able to help. Fortunately, the French Coast Guard then took over and organized a sea rescue cruiser to tow her away.

Fortunately, in the morning hours the wind died down a little and we could even set the genoa again in addition to the double reefed main.

In the early afternoon we reached the French coast. However, we decided not to sail to Marseille, but to head a little further east to Port Miou, a natural harbor in one of the calanques near Cassis. There you can either moor further inside on jetties or at the entrance (but still 360 degrees protected) on buoys with shore line. We opted for the latter and looked forward to a quiet night.

At night, however, we experienced quite a surprise. I woke up to very unusual noises and a strange movement in the ship. Startled, I jumped out of my bunk and found that there was a strong current of at least two knots across the beam, so that the shore line was stretched to bursting. Logs and larger branches drifted past the boat into the calanque. After a few seconds the current suddenly stopped and then started in the opposite direction. Unfortunately, in the meantime my dinghy had drifted onto the then slack shore lines. It was whirled into the air by the sudden renewed tension and landed upside down in the water, with the outboard motor underwater.

Luckily I was able to turn the dinghy around quickly and amazingly the little Tohatsu two-stroke survived the short submersion without a problem. But what the hell was the cause of this current? Its direction changed twice more within the next minute, but this time much less strongly.

While my father speculated on the underground freshwater springs that flow into the calanque, I guessed that it was a mini tsunami. I was probably right, because the harbormaster told us that the water level in the back part of the calanque had abruptly risen by more than half a meter and had torn several cleats out of pontoons and boats. Something like this had apparently never happened before and his only explanation was an undersea landslide that must have triggered a mini tsunami. Pretty crazy and I am very glad that the whole thing turned out smoothly. Just minimal more current from the broadside probably would have ripped out ahora’s stern cleats. And I’m also glad that the dinghy outboard didn’t take any permanent damage.

Fortunately, we didn’t let the mistral or the tsunami spoil our mood and enjoyed the French way of life like God in France for the next two days, exploring Cassis and the neighboring Calanques.

To get to the neighboring bay, we took the dinghy ashore, where we came across a hiking trail that led across the headland directly to the next bay, the Calanque du Port Pin. The landscape there was simply gorgeous. But we were a little surprised that we were the only people on this dream beach in the middle of August.

All the better, we thought. Time for a cool down Robinson style. When we still met no one after half an hour on the beach, the whole thing started to seem a bit strange to us. A brief search on the Internet then brought clarity: The national park was closed to visitors because of fire danger from the mistral!

Of course, we had not noticed that, since we had not come to the park on the official way, but with the dinghy. But ignorance does not protect from punishment, so we decided to head back to the boat, before we would be caught by a park ranger. Too bad actually, because such a Calanque all to ourself at the beginning of August is not something you experience every day…

We liked the Calanques a lot, but of course there is much more to discover in the south of France. And so we sailed on to La Ciotat. There we stayed two nights in the harbor and took the bus to Marseille, where I had an appointment for my Corona vaccination. I was very happy that I could get vaccinated so easily in France even as a foreigner. With a vaccination certificate, traveling within Europe is now much easier.

After the time in La Ciotat we enjoyed anchor life for a few days and explored the island of Porquerolles, which is off the coast and offers a few excellent anchorages. I will report in detail about this and the other islands in the next blog post.

After ten days on board together, it was time to say goodbye. In the port of Toulon, my father disembarked and started his journey home. I am very happy to have a father who is still so active at the age of 80. I’m already looking forward to the next trip with you, dad!

As a little “bonus”, here is a little guest post from my dad about our trip: