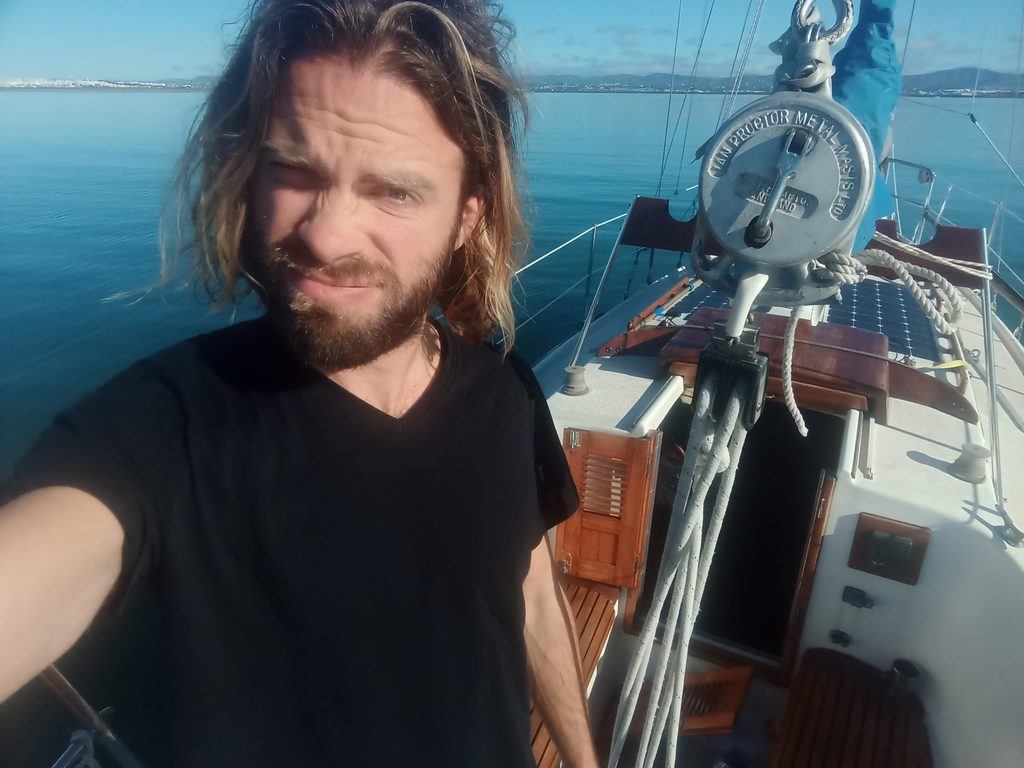 In my last blog post, I wrote about the fact that, although the situation here in Portugal is getting more serious, there are far worse places than anchoring out here. But an hour ago, the situation changed dramatically: I now have a curfew and I was threatened with arrest if I set foot on land.

The Policia Maritima just came alongside and brought the “good news”: I’m not even allowed to go shopping for groceries now. Instead, I was given the phone number of the local supermarket on Culatra, which would deliver me food in case of emergency.

How did this happen? I suspect it’s because I came here from Faro this morning. Last week, I sought shelter there from strong winds and also to replenished my water supplies. But I got kicked out of there this morning because the Muring on which I was lying was private (and supposedly not designed for a boat of ahora’s size).

So this morning I motored the 1.5 hours from Faro back to Ilha Culatra, which is much nicer anyway. Especially if you can’t do anything except going for a walk or jogging. Currently there is a state of emergency in Portugal because of Corona, but short stays in the fresh air, e.g. to make a sport, are officially allowed. I took advantage of that, jogging along the deserted beach at noon and I also went for a round of swimming.

Unfortunately, however, this freedom was extremely short-lived. In the evening, I got a visit from the Polica Maritima, who kindly but seriously explained me that from now on, I was not allowed to leave my ship anymore. The argument that I came only from Faro, and not from Spain, was not accepted.

This was of course a shock, because even though I like ahora, I don’t want to be locked in on it. I have a lot of understanding that all necessary measures are being taken to contain the disease. But I cannot understand that all Portuguese (and also all foreigners who are here with their campervans) are allowed to go for a walk and to go shopping and I am stuck here on board in quarantine. Even though I have been in Portugal since October and have been here in the lagoon for over two weeks.

At first I thought that all sailors here in the lagoon would have the same problem. But apparently it only concerns an English boat that also came from Faro, and me. My friend Micha got around the harassment, even though he also came from Faro. But he doesn’t have an AIS, and I guess that’s going to be the reason.

Just before heading out of Faro, I had already thought about whether I should switch off the AIS transponder in order to stay “under the radar”. But then I deliberately decided against it, because such a track is also proof that I just didn’t come in from Spain.

Anyway, I’m now pretty depressed, because the situation is now really not fun anymore. As I said, I am absolutely in favour of all measures to contain the pandemic. But what is happening to me here is, in my opinion, unnecessary harassment. I will call the office of the police tomorrow, maybe I will be able to clarify the situation. I still have hope. Keep your fingers crossed for me!

Not all is well,

P.S.: Despite all the annoyance, I am aware that there are a lot of people who are currently much worse off than me. I am healthy and have enough to eat. In this respect, I do not want to moan too much. I wish all readers all the best and hope that they will also be healthy and safe!

Good luck, I hope the weather holds up as there are others in the same situation. Hang on in there.

Life on land is surreal too. So sorry for your captivity. Hope you have some books and some power.

Hi Linda,
thanks for your message. So far I have some books and my laptop is running on Solar power, so that is good for now. Hope you are safe and healthy!
All the best to you and your loved ones!
Jan

Maybe is because of your movements as ALL not only British have had their movements restricted.

I am in touch with the authorities. It is indeed because I moved the boat from Faro over to here. But what else should I have done, as they told me to leave there… Will see how the story goes on…

Thank you so much for your eloquent post and the info. Trying times indeed, I also can t wish for a nicer place to ve locked down I than Culatra, and I hope the promise of provisions are forthcoming. Good luck.