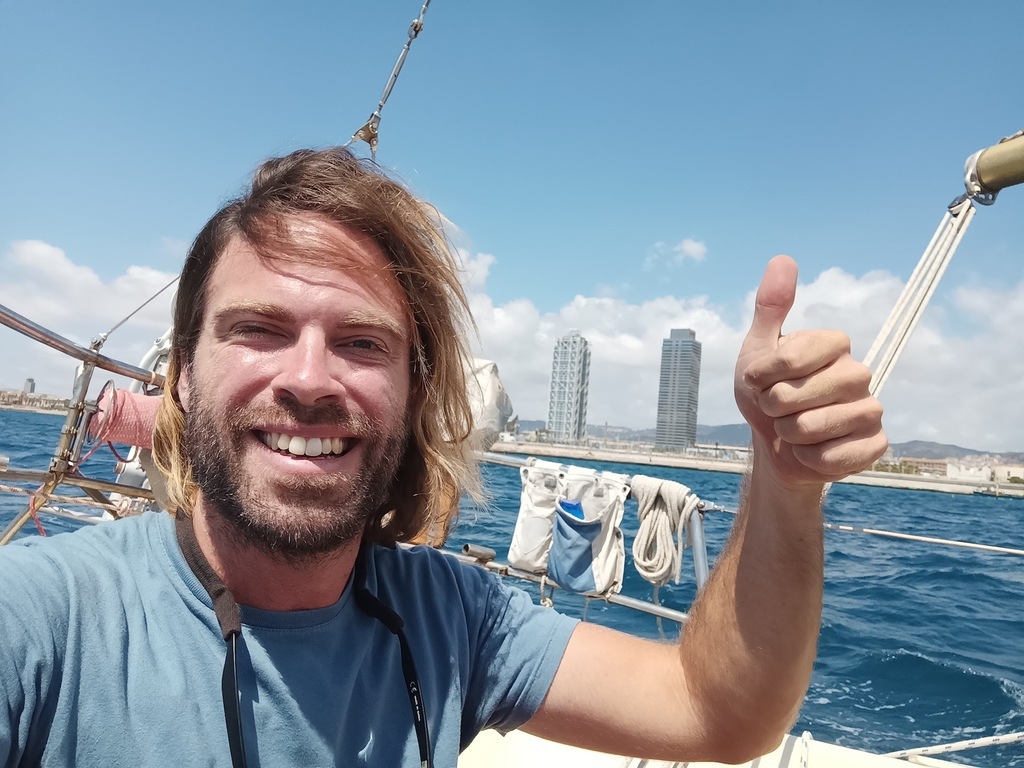 Back in Sailing Mode

After almost 8 months in port in Barcelona, I’m finally moving on! I cast off the lines at the end of June, trading my city life for life at anchor again.

Before that, however, there was still some work to be done: among other things, we overhauled the engine’s water pump, replaced the diesel filter and diesel pump, and fixed a leak at the injection pump. Now the old diesel purrs like new again and will hopefully do so for a few more years. Alex, a mechanical engineer and the brother of a friend from Barcelona, helped me with the work. Thanks for that!

As a reward after the work being done, we did a sunset dinner test sail including a swim with dolphins. And all that right in front of my home port Port Olímpic!

Two days later I finally left for good. I always feel a bit of melancholy when leaving a place I have grown fond of and when having to say goodbye to the many nice people who have become friends over time. I had a great time in Barcelona and will definitely be back one day. But for now it’s off to new shores. “Walk on then, be off, be well!, oh sweet heart of ours.” (translation of the last verse of a great poem by Hermann Hesse)

Since I was in no hurry, I took advantage of the 4 hours of sea wind to sail to Arenys de Mar. I nowadays see it as a challenge to use the engine only when absolutely necessary (i.e. mainly for harbor entrances). Otherwise I go with the flow of the wind. If it is favorable, I sail. If not, I look for a nearby harbor or anchorage.

Initially, my plan was to continue the next day, but then something quite stupid happened to me. Before I wanted to head for my bunk I “quickly” started a security update for the Klabauter-Shop. Without checking if my backup script really worked. Unfortunately it did not.

As a result, the shop was offline and nothing worked. So I spent the whole night trying to fix the problem somehow. Unfortunately without success. Luckily, I was able to install an update from my web host the next afternoon.

This was not how I had imagined my first day on the road. But I learned a lesson from it and now, fortunately, everything is running smoothly again. Speaking of the Klabauter-Shop, here’s a little business update for those who are interested. For all others: just read on below.

OK, that’s it for the business talk. Back to sailing:

After I had fixed the shop, I sailed on along the coast, direction Northwest. Unfortunately, there are very few sheltered bays on the southern Costa Brava, but I found one anyway and there I enjoyed life at anchor for two days.

Roman, the friend with the mechanical engineering brother, came to visit me for the weekend. The two brothers are experts in 3D printing and have a lot of ideas for the use of 3D printing for boat parts.

Roman already brought along a prototype for a new throttle handle and “Klabauter clips” for my railing. The shape fits, now we still have to think about which plastic (compostable?) is best suited. As for the material, the sky’s the limit with professional 3D printers, even gold would be possible. But I guess that would be a bit expensive for my throttle…

After a relaxing weekend with Roman I moved on to Cadaqués. There I wanted to meet Laura and Nathan, two friends from Barcelona who were hanging out on their boat there. By the way, they are also working on an extremely exciting project: the next Vendee Globe campaign by Didac Costa.

The wind was perfect from the south, and so I headed off only under genoa and dead downwind. After a quite relaxed start, the wind quickly picked up to a good 6 Beaufort. So the whole thing became quite a fast ride and I needed only 5.5 hours for the 30 nautical miles.

Because of the more protected location from the southerly wind I took a buoy in Port Lligat, a bay north of Cadaqués and directly in front of the residence of Salvador Dalí.

The next day I moved over to Cadaqués and stayed there for 4 nights. This place is pretty magical. No ugly skyscrapers like in many other parts of the Spanish coast, but instead you can find beautiful little streets, art galleries and cozy cafes. However, at 50€ per night for a buoy (!) the fun is not cheap either. But I guess that’s the price for sailing the Med in summer…

Besides Laura and Nathan, I also met Meri, an old friend I got to know 12 years ago in San Francisco, who lives in the village next door. How small the world is! And how nice it is to be able to stay in touch through social media. I have already met so many old friends and acquaintances on my trip.

Right now I’m waiting for my dad, who is flying in tonight. Together we want to sail towards Marseille. I am very happy to have him back as crew. When we sailed around Brittany together two years ago, we were a very good team. And a little father-son time is also a fine thing as well.

P.S.: One reason why I would like to head to France as quickly as possible are the Corona numbers in Catalonia, which are skyrocketing right now. I’m worried that the borders will be closed soon. I’m now freshly (negatively) tested and the mistral is supposed to take a break this weekend. So no time to waste! Off we will go across the Gulf of Lion! I hope to be able to get vaccinated in France to be able to travel again more easily and without all the hassle of testing.

Great update! WordPress security updates do install flawlessly for the most part but as you experienced, sometimes they do fail and things get turned upside down. Consider using snapshots or similar approach as it enable you to instantly rollback to previous versions when needed. Happy to see the BoatHowTo project is progressing, the video and sound quality is really good. Keep up the good work and stay safe out there!

Thanks! For all my WordPress sites I do use backup-plugins. The problem was with my shop, which runs on Shopware. I had made a custom backup script but unfortunately did not test it thoroughly enough. But anyways, lesson learned. 😉 Greetings from France!