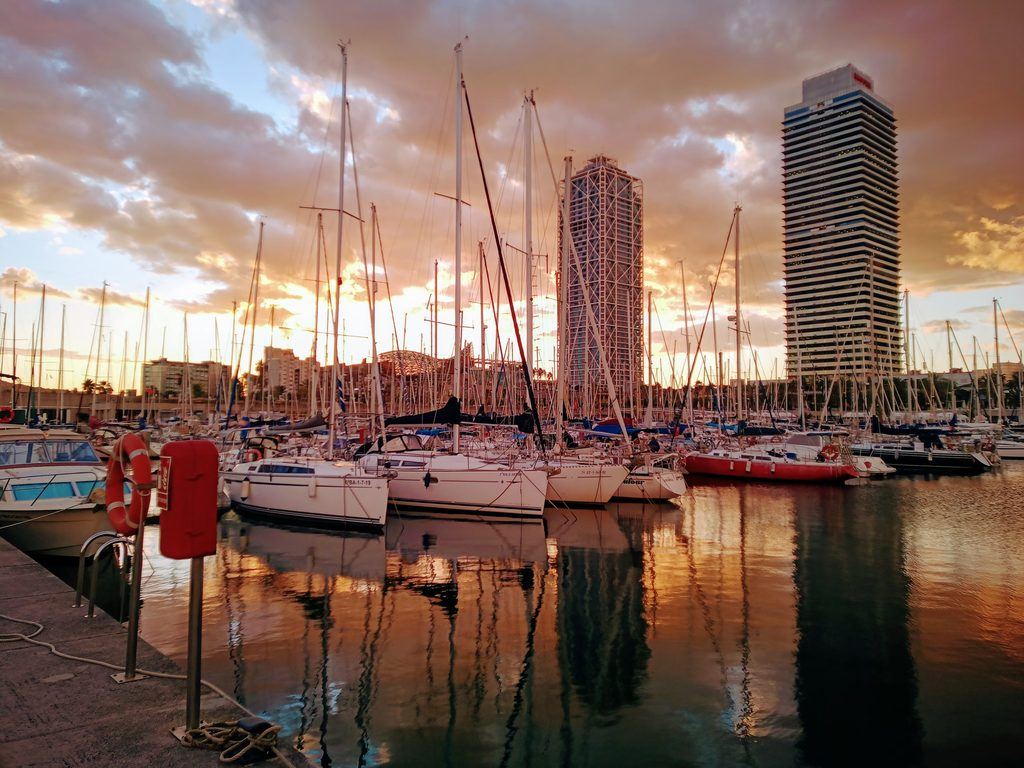 During my time in Mallorca my decision got more and more clear: I want to spend the winter in Barcelona.

Initially I had planned to sail to Greece. But in retrospect, I’m very happy to be spending the winter in a large, international city and not on a small Greek island, where I don’t know the language and with potentially very few social contacts.

After a few days in Port de Pollença in the north of Mallorca, the weather window with southerly winds finally arrived. Thus, around noon on October 19th, I cast off the lines for the 100 mile long crossing.

The conditions for the crossing were perfect: at least at the beginning there were hardly any waves and I was on a beam reach with 4-5 Beaufort. I really enjoyed feeling the freedom of being at sea for the last time at least for a while.

A swallow came by for a visit a good 20 miles north of Mallorca. It must have been blown out to sea. She flew into the cabin several times, probably to look for a place to rest, and even sat down for a second on the finger I offered her. But then she disappeared back towards the open sea. I hope she made it to the mainland …

I tried to get some sleep already in the afternoon, but it was not so easy with the boat that was now rolling with increasing intensity. Fortunately, I came up with the idea of slinging my hammock in the cockpit. In the hammock I hardly noticed anything when the ship was rolling – I was basically gimbaled. In this way I was able to avoid fatigue like I did back then on the Bay of Biscay. However, it got quite chilly in the hammock despite the winter jacket and sleeping bag, so this method is definitely not suitable for winter trips.

Of course I didn’t sleep through the night, but set myself an alarm every 20 minutes to keep an eye out for ships and to check the status of the sails and the windpilot. During longer periods of wakefulness I also listened to “The Great Gatsby” as an audio book. Even if I didn’t get as much sleep as usual during the night, I could certainly have sailed a few days longer at this rhythm. Good to know for times when there are longer journeys to be made in the future.

Towards the end of the night, the glow of the lights of Barcelona in the sky competed with the dawn until the sun finally won. After a beautiful sunrise, I moored at the Port Olímpic in Barcelona around 1 p.m., after almost exactly 24 hours at sea.

It was a strange feeling to imagine that ahora would be “chained up” by the mooring lines here for the next few months. On the other hand, I am also looking forward to some city life as a contrast to anchor bays without the amenities of civilization. And to a “regular” daily routine so I would be able to work in peace on my new project. And, last but not least, I was happy about warm harbor showers and the luxury of being able to heat with shore power and operate my electric water heater…

For my work I found a great coworking space very close to the marina and there I met some nice people who also work on digital projects.

And now that the restaurants in Spain are open again at least during lunchtime, I treat myself to lunch every day on one of the terraces in the sun. One could say that I’m too lazy to cook, but of course I tell myself that I’m only doing this to support the local gastronomy plagued by Corona. 😉 Maybe both are true …

After I have already indicated it several times, I would now like to finally introduce my new project: BoatHowTo.com

I am now producing online courses for boat owners in English! Not alone this time, but together with the probably best-known authors/experts in the field from both sides of the Atlantic: Michael Herrmann and Nigel Calder.

I am extremely curious how the project will develop. I can already say one thing: Creating good video lessons and speaking freely into the camera is more difficult and more work than you might initially think. On the other hand, I am convinced that our first course on the subject of boat electrics is by far the most comprehensive on the topic you can find anywhere in the world! (And I’m not the kind of guy to say that for no reason …)

In addition to the work on BoatHowTo, there was also more work for my Klabauter-Shop than usual. I am currently in the process of re-organizing the over 6,000 products and I’m finally writing meaningful category descriptions. Due to the pandemic, there has been an increased number of customer inquiries via email in recent months. But the lockdown in Germany also gave me a huge increase in sales, being an online shop, which of course makes me very happy and gives me the opportunity to support the Spanish restaurant owners with the income … 😉

In general, I can say that my stay in Barcelona is mainly characterized by work. In this respect, the lockdown comes in handy, because there is much less distraction and I am not tempted to hang around in tapas bars until late at night.

Nevertheless, I sometimes miss hanging around with other sailors like I remember from my time in Porto. That’s why I very much hope that the Corona situation will relax in spring and summer and that the thing that makes travel so exciting for me (meeting people) will be easier again.

But until then I’ll stick to beeing productive …

Happy to read your update, Jan. Can’t wait to go sailing myself. In the meantime I’m learning from you. Keep up the good work! Greetings from Norway

Thanks Pete! It always takes a while to get things started and going, so I am sure that with persistence and grit you will soon be able to get out there as well!

So great. I hope, one day can traveller with you friend.

Thanks, Azhan! I am sure one day I will sail to Malaysia…