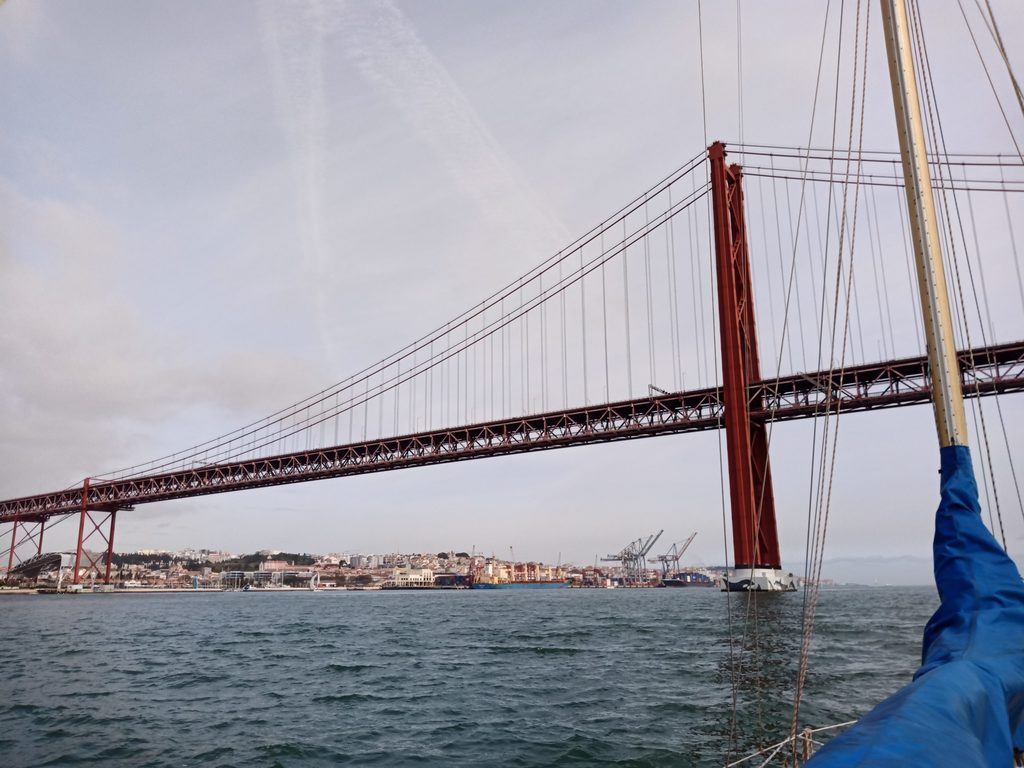 After three and a half wonderful months in Porto I headed out at sea again on February 4th 2020! As with my arrival in Porto, I was not alone on board on this part of the trip: Tania, an acquaintance from Freiburg, signed on as “First Mate”. She was spontaneous enough to book a flight to Porto with just one day’s notice, so we could use the weather window for the journey south.

I was very happy to have a competent crew on the long distances down the coast and Tania was happy to meet another Laurin 32. She is an absolute Laurin-Koster fan and currently even has two boats of the same type. Unfortunately, they are currently both on dry land in wintry Sweden. So the trip was a good opportunity for Tania to sniff a little sea air.

The Portuguese west coast is not an easy sailing area: the open Atlantic often brings considerable swell that breaks on the sandy beaches and rock capes. Thus, a safe entry into most of the Ports and rivers is only possible in very calm weather. The nearest port south of Porto which allows entry in all conditions is Nazaré. And that is about 100 nautical miles away.

We chose Nazaré as our next port of call, even though the weather would have allowed an entry into Figuera da Foz. But with the announced north wind, we wanted to cover as many miles as possible.

We left around noon, after having said farewell to my friends. Ahora now finally left her berth, where she was tied on and rocked by the swell from the pilot boath for the last few months.

The open Atlantic greeted us with a moderate swell, which was also coming in with a long period. As a result, it was quite comfortable on board despite the beam reach, and the rolling of the ship was not too bad. I really enjoyed being on the “road” again.

I was very happy to have Tania with me. This allowed me to take a nap at night without worries. That close to the coast, I would have considered sleeping under way too risky. As it turned out, the worries were not without reason, twice during the night, we had to give way to a fishing boat without AIS, heading towards us on a collision course.

Otherwise, the ride was quite relaxed, we could sail during a good two third of the way, the rest we motored due to lack of wind. The swell was also limited and so we enjoyed the dolphins, who accompanied us throughout the night and the beautiful sunrise.

Around 1000 o’clock we entered the port of Nazaré and were warmly welcomed by our friends Ben and Elena, who were travelling with their boat Marianne and Brendan and Carrie, from the American yacht Creeky, who we already knew from Porto.

Nazaré has not only one of the few “all-weather ports” on Portugal’s west coast, but also the highest waves in the world. How this fits together becomes clear only when you take the chart. Just off the coast and north of the city ends an underwater canyon, through which, in the right conditions, the swell is funnelled from the ocean directly to the beach resulting in breaking waves up to 100 feet high!

Two kilometres south of the canyon, on the other side of the bay, lies the marina, which is protected by heavy breakwaters from the waves, which reach at most “normal” wave heights in this part of the bay and supposedly allow entry in all conditions.

The weather was perfect, and so we started a short hike through the village to the lighthouse on the cliff. The towin is quite touristy, but has nevertheless retained the charm of a fishing village.

The ascent to the cliff was quite exhausting, but when you sit on the boat for hours, a bit of exercise is quite welcome. We were rewarded with a magnificent view.

On the other side of the cliff is the end of the canyon, where the monster waves pile up. Today, however, the sea was surprisingly calm, so I even ventured into the knee-deep water. But even here the power of the waves was quite extreme, so that I quickly started my retreat.

In the evening we enjoyed excellent all-you-can-eat sushi, together with Ben and Elena. Since for the coming day, nothing but calm was announced, we stayed a second night in the harbor and enjoyed the good weather and the already noticeably warmer temperatures compared to Porto.

The port was so protected that Ahora lay absolutely silent. I probably could have even loosened the mooring lines and the ship wouldn’t have moved an inch. It was an extremely strange feeling, after months of swell in the harbor in Porto. Almost eerie.

On Thursday we went on to Peniche, about twenty miles further south. We set off extra early to take advantage of the southeasterly wind, which was announced in the morning. And so we sailed almost the entire distance and enjoyed the sunshine.

Peniche is also a nice little place, though not as polished as Nazaré. Here, too, the port was quite well protected.

On the next morning we set off for Cascais, 45 miles away. At first we were able to sail close hauled for a while, but then the wind turned completely against us. According to the forecast, as of 11 a.m., the wind was predicted to turn north, but unfortunately this shift took its time. So we motored for a good 3 hours against short, steep wave and drizzle. Ugly.

Luckily, however, the announced front finally passed, the wind turned to northwest and we speeded past Cabo da Roca. With this cape, we had rounded the westernmost point of continental Europe. From now on, ahora and I will go east again, until I will eventually head over to the Canary Islands.

As the wind fell more and more north, Ahora began to roll awkwardly, so we were happy to finally round the top of Cabo Raso, which is slightly more southerly. The last miles we covered in the dark and by 2000 o’ clock, the anchor fell in the light of the full moon in the bay of Cascais.

We enjoyed a decent portion of pasta and then fell into our berths. Tired but happy.

The next morning we were greeted by bright sunshine and calm winds, so that, we motored up the Tejo river into Lisbon for 3 hours. Finally: T-shirt weather in February! 🙂

After passing the impressive Ponte 25 do Abril, we stopped in one of the marinas behind a container terminal.

Lisbon is a great city, and we spent the afternoon and evening right next to the marina in the LX Factory, an old industrial complex that has since been seized by creative hipsters.

The next morning I spent working for the Klabauter-Shop in yet another creative place, Village Underground Lisboa.

In the afternoon I went to the city with my folding bicycle. However, I had to limit myself to the area on the riverbank. The rest of the city is just too hilly for a bike (especially one without gear shift…)

In the evening we went to bed early, because another long haul was waiting for us. Off to the south, towards Algarve!