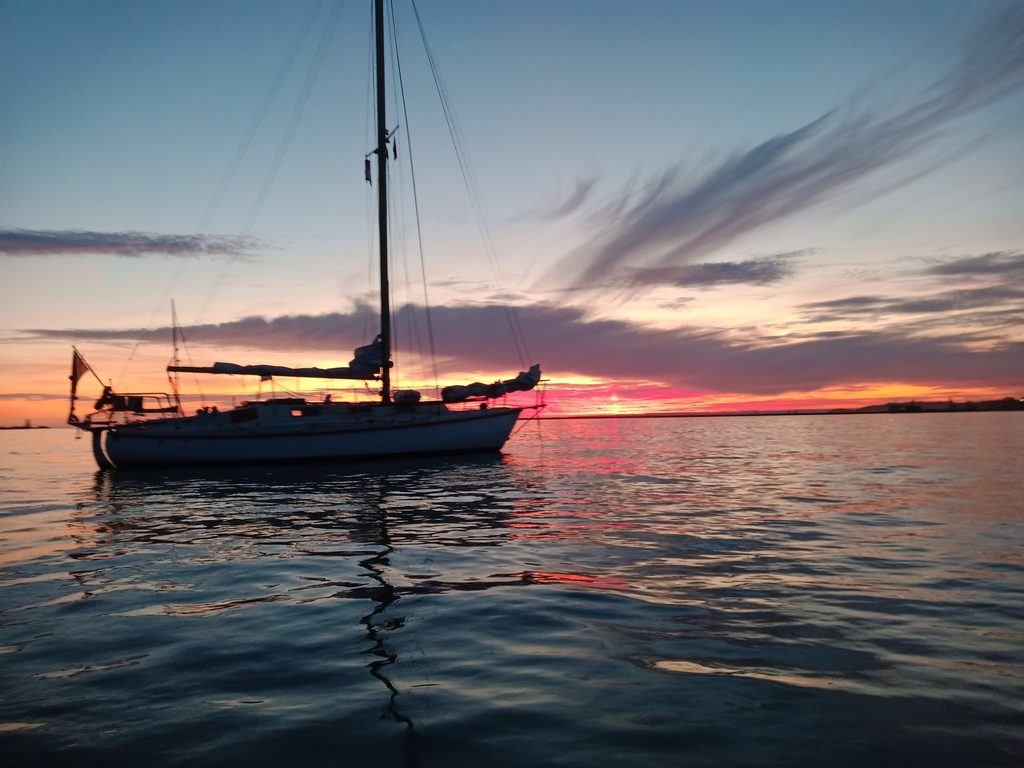 We left the marina in Lisbon at dawn to get out of the Tejo with the ebb tide. At the mouth of the river, there was hardly any wind, but a good 4 meters of swell from the northwest, which was caused by winter storm Sabine on the North Atlantic. The same swell that caused the waves of the year further north in Nazaré led to quite scary breakers on the sandbanks to the left and right of the estuary. Luckily, the charts and buoys here were very accurate, but it is a strange feeling when the already steep waves you’re facing break at a distance of just 1000 feet on both the port and starboard side of your boat. You definitely don’t want to get closer to one of these sandbanks…

After a good two hours of motorsailing, we left the river mouth behind and now enjoyed the constant highs and lows of the ocean swell, which moved Ahora gently and barely noticeably up and down with a period of 15 seconds. The wind was weak and came exactly from behind, but with the sails wing-on-wing, a boomed out jib and a preventer on the main, we were able to make almost three knots. The boat was surprisingly stable despite the wind directly from the stern and the sails hardly flapped, so we enjoyed the slow ride a lot.

We had considered having a stopover in Sines, but since we would not have arrived there until after midnight anyway, we decided to sail through all the way to Sagres.

The night was calm and full of stars, but the wind kept decreasing, so we started the engine at about 0200. We thus motored the second half of the trip and rounded Cabo de Sao Vincente around noon. Finally we had left the rough west coast of Portugal behind and the south coast of the Algarve lay ahead of us.

For the first night, we went to a mooring buoy in Sagres and enjoyed a proper lunch in a restaurant at the fishing harbor. We were both quite tired, so we only took a short walk into the city and then went to bed quite early.

It was for sure nice to put the dinghy back into the water, after it had spent the last months folded below the V-berth. Here in the Algarve, the distances are short, and so I will probably mostly carry keep it inflated and put it on the foredeck while sailing.

On the next morning we were greeted by the sun. The forecast, including the 16-day trend, looked like this:

After long rainy days in Porto, strenuous trips in the North Sea, the English Channel and the Atlantic, it was now time for summer (feeling) in February. I deserved it!

With this forecast, Tania decided to stay on board for a few more days, so we explored the area around Lagos and Portimão a little bit. Due to the stable high pressure area, the winds were very weak and waves were scarce. Sailing was still fine, however, as usually during the days, a thermal land wind with force 2-3 came up, so that one could sail comfortably on a beam reach up and down the coast.

With the exception of a short stay in the marina in Lagos, we anchored out in Portimao and Alvor, both highly recommended anchorages.

Even though on the Algarve is still absolutely low season, you can already see that tourism is much more pronounced here than in the north of Portugal. Many waiters in the cafés are foreigners and sometimes do not even speak Portuguese. It’s a pity, now that I had learned the language. There are also a lot of campers on the parking lots on the beaches. Mostly people who want to escape the cold winter in northern Europe. Well, who wants to blame them. I did the same.

A real downer on this otherwise very beautiful coast, however, is the partially very ugly development with hotel and apartment facilities. In Portimão in particular, the developers could have planned a little more carefully. Luckily, the skyscrapers do not disturb the view from the anchorage too much.

Sunday evening we headed back to the marina of Alvor, where I said goodbye to Tania. Thank you for your companionship Tania, it was a lot of fun to sail with you!

From now on, I will continue on my own again. I’m looking forward to exploring this beautiful area!