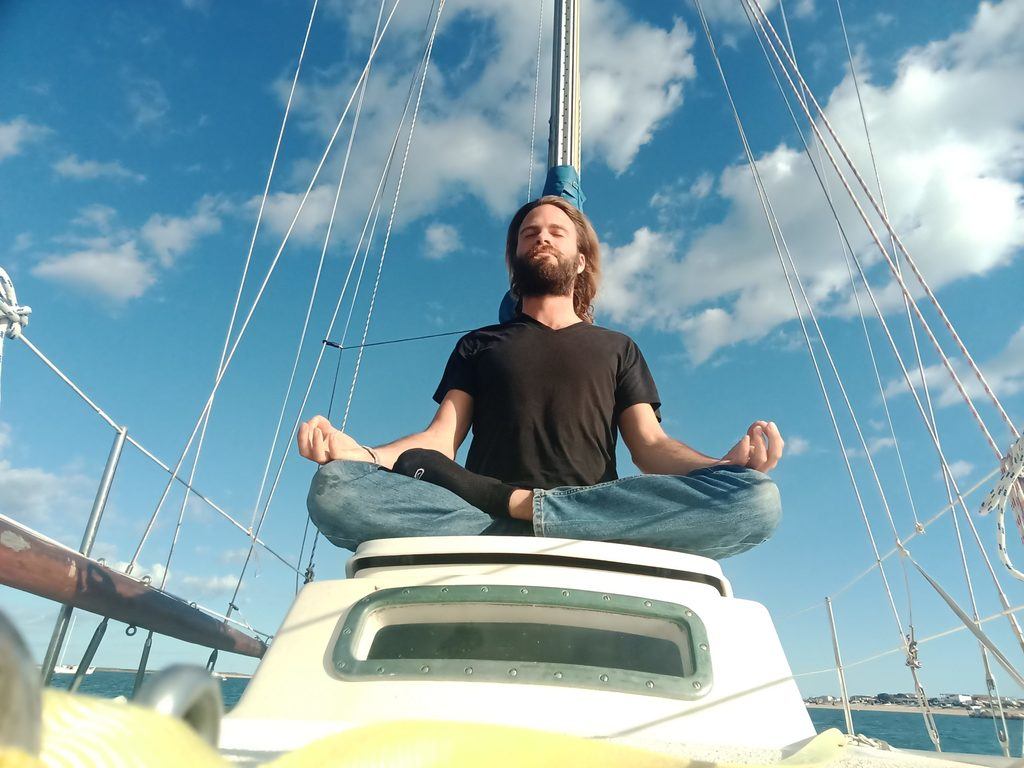 After some initial frustration about the ban on entering Portuguese soil, I already felt much better after the wonderful support I got from my neighbours here at the anchorage. Therefore I want to say a few words, why I’m actually quite happy now.

My overall situation has not changed much during the last week, except that I now know a little more about the background of my ban to go ashore: it has nothing to do with quarantine, but with the fact that Portugal has closed its sea borders. As an anchoring boat with a German flag, I am apparently not officially in Portugal at the moment, so I am not allowed to land with the dinghy. A pretty crazy situation, but at the moment a lot of things in the world are crazy.

But what has changed is my view of things. How one deals with the current situation of crisis is, after all, mainly a matter of the mind. And I see my situation quite positively now.

Of course, I could now complain, moan and be angry that my rights as EU citizens are being restricted. (As some other sailors do.) But this does not help anyone. On the contrary, it only creates a bad relationship between our Portuguese hosts and us sailors.

These are extraordinary times, but they will also be over at some point. And I’ve realized in the past few days that I’m probably better off here than many, many other people “out there.”

First of all, I’m healthy. And luckily my family as well.

Secondly, unlike many others, I do not yet have to worry about money. I have minimal running costs here, especially now that pricy visits to coffeshops and restaurant are not an option anymore. My savings will be enough for quite a while and the Klabauter-Shop is still making sales. (Even though it has become less, now that many people in Germany are no longer allowed to go to their boats.)

Why my situation isn’t so bad…

I have consciously decided for a life on board and want to sail (at least according to current planning) single-handed across the Atlantic next winter. This would mean 3-4 weeks of isolation, without human contacts, without internet, without fresh food and with heavy seas, making cooking and life in general much harder. That would thus actually be much “worse” than my current situation. That’s why I now decided to consider it as a kind of “transatlantic training for beginners”.

Why for beginners? Unlike on the ocean, I have many opportunities and freedoms here. First of all, there are my acquaintances from the neighbouring boats, who come by from time to time, e.g. for “Dinghy Drinks”. Everyone in their dinghy with enough distance and yet close enough to be able to talk and enjoy the sunset.

Friends who have been living here on their boats for a long time and are therefore allowed to go ashore bring me food and provide a bit of company. (Thanks, Rainer and Lily!)

On the Buona Onda I could even wash my laundry. Thank you Ronny, Taraneh and Franz! And Micha from SY Terra has caught a lot of small fish that taste excellent when fried. Thank you Micha!

To top it all off, Rainer left me the key to his catamaran “Zen” before he went to Germany to join his family. In return for taking care of the boat, I can use it as an office and for doing sports and yoga on the huge deck. What a luxury compared to the cramped space on ahora.

One can only hope that the police will not complain when I go there with my dinghy. I will just do it for now; after all, I am not putting my foot on Portuguese soil…

My unproductive time due to all the bad Corona-news also has gotten better, and I can now focus again on my work. I’ve even started preparing my taxes! Unbelievable what I can do when I now have the time to do it…

Also from the official side I am well cared for

Today I also tested the “delivery service” and called the number that the Policia Maritima had given me. The number wasn’t, as I had expected, from a water taxi that charges a hefty delivery fee. Instead, it was from a fisherman from the island who came by 5 minutes after my call to pick up my shopping list. Another 20 minutes later, he handed my order over the railing. Without any delivery fees.

The nice guy even refused my tipping. I was at least able to persuade him that I could invite him for a beer once the crisis is over. I am really glad, that the people here are so nice! It now also paid off that I have been diligently learning Portuguese over the last few months. I was very proud to be able to conduct the order and the conversation with the fisherman in the local language.

In addition to the fisherman, I would also like to thank the guys from the Policia Maritima, who were so far (despite the bad news) very friendly to me. For my English neighbours, who are also not allowed on land, a policeman even did some shopping in Olhao for groceries that are not in stock in the small shop on the island.

The policemen are just doing their job and have no influence on the law. But they assured me to be there whenever I needed something.

Thus, all in all, I’m doing damn well here! The only thing I can’t do is walk around on land. But otherwise, I can endure it for quite a while here, if necessary even a few weeks or even months. That is why I am extremely grateful to be able to be in such a privileged position in these times.

You are in my thoughts

I know that many people (including many readers of this blog) are not so lucky. In addition to many desperate people on land, there are also many sailors who are in a much worse position than me. Sailors who are involuntarily stuck in very expensive marinas, not allowed to leave or even use the showers, but still having to pay 45 € every day. Sailors who have to anchor in unprotected places or (I have heard this too) who are not even allowed to throw the anchor. Sailors who have been turned away by marinas, even though they only want to refill their water tanks. And sailors who are quarantined in the Caribbean and are afraid of the hurricane season.

I keep my fingers crossed for all of you, whether you are on land or at sea, that you find solutions to your problems. And that people keep up the solidarity and take care of each other. Hang on there! At some point the times will get better again and then the world’s oceans will be open and free again! If you want to, write a comment about what the situation is for you right now…